Backing up Microsoft Exchange and SQL files is very straightforward. When you select an Exchange .EDB file, the SecuredBackup client will automatically add the appropriate VSS Writer as well as run the Microsoft Eseutil utility to validate the .EDB file.

Whether you choose to backup to the cloud or your own server restoring Microsoft SQL Server databases from MDF/LDF files is simple. The quick easy backup of SQL-Server Databases lowers your total cost of ownership in addition to providing you with speedy deployments. Our intelligent detection of SQL-Server Pre-programmed selections of SQL-Server databases to exclude model and demo databases, but include Master and other databases makes for a no fuss solution

The SecuredBackup software client is a VSS Reader that makes standardized calls to the VSS API, and thus SecuredBackup can backup any application such as SQL and Exchange, including some operating system functions supported by Microsoft, which have implemented a VSS Writer for their files. SecuredBackup’s VSS Reader backs up files in “full copy” mode by default, or optionally “full mode”, and then SecuredBackup will either use full or differential methods to transmit those files to the backup servers using the method you have specified within SecuredBackup (the default is differential, a.k.a. delta block, to minimize the client’s Internet bandwidth).

Automatic integrity check is performed every time the backup process has been completed. This ensures that your backups contain no errors and can be used for restoring your database.

Back up to a local disk and upload to the cloud. If the local backups are lost, cloud copies are always safe and secure with us. 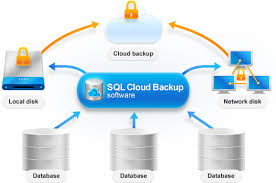 Backup encryption is available starting at the  version of SQL and or Exchange Cloud Backup software. The encryption is mandatory when uploading a SQL Server/Exchange Server backup to the cloud, thus ensuring maximum security and confidentiality of your data

The built-in scheduler wizard allows you to specify what to back up and where to save backup files along with some other parameters. Then sit back and watch as the routine is done for you automatically.